The Mediterranean Diet and Your Health

The Mediterranean Diet and Your Health

Studies have shown that risk of heart disease is lower for populations living around the Mediterranean Sea.
This risk reduction has been found to be linked to the foods consumed by those living in the area. Diet in this area, aptly named the Mediterranean diet, consists of a higher intake of fish, whole grains, fruits, vegetables, legumes, nuts, olive oil (as the primary fat source) and a lower intake of dairy products, meat and poultry. 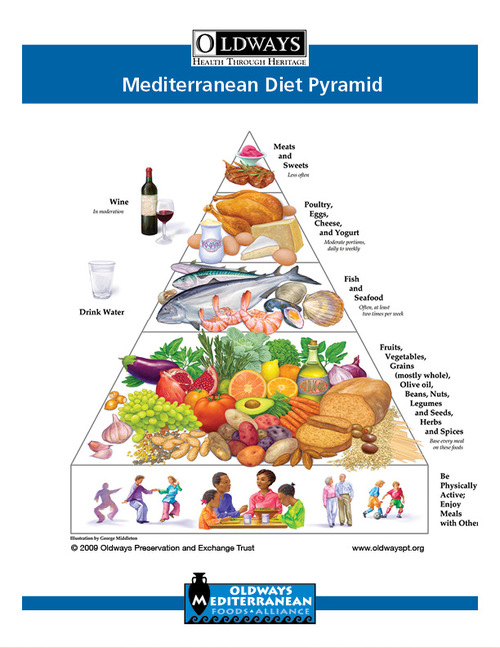 Get detailed food choices and serving sizes based upon the pyramid.

The study, which included 25,000 adults showed a 37% reduction in death vs those not on the diet. 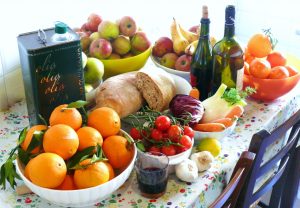 The Mediterranean diet has also been shown to reduce risk of developing cardiovascular disease in those who currently are disease free and improve surrogate markers for cardiovascular disease, such as waist-to-hip ratio, lipids, and inflammatory markers. Other benefits proven in clinical trials include reduction or prevention in development of breast cancer, depression, colorectal cancer, diabetes, obesity, asthma, and erectile dysfunction.

This healthy diet also aids the brain by providing protective effects against normal cognitive decline and dementia. This is thought in part to be due to a reduction in inflammation and vascular disease. Researchers in Scotland have actually found that older adults who follow the diet have a much less loss of brain volume with aging compared with those who did not adhere to the diet. The cognitive benefits are not limited to older adults. Studies have shown that children have a higher risk of developing Attention Deficit Disorder when they adhere to a diet that is deficient in foods found in the Mediterranean diet.

As you can see, a healthy diet can have positive effects in the prevention of multiple disease states as well as contribute to a better quality of life as you age.

♥  Following a healthy diet can be as important as the prescription medication that you take. ♥